Monte Rosa SkyMarathon – the legend is back! 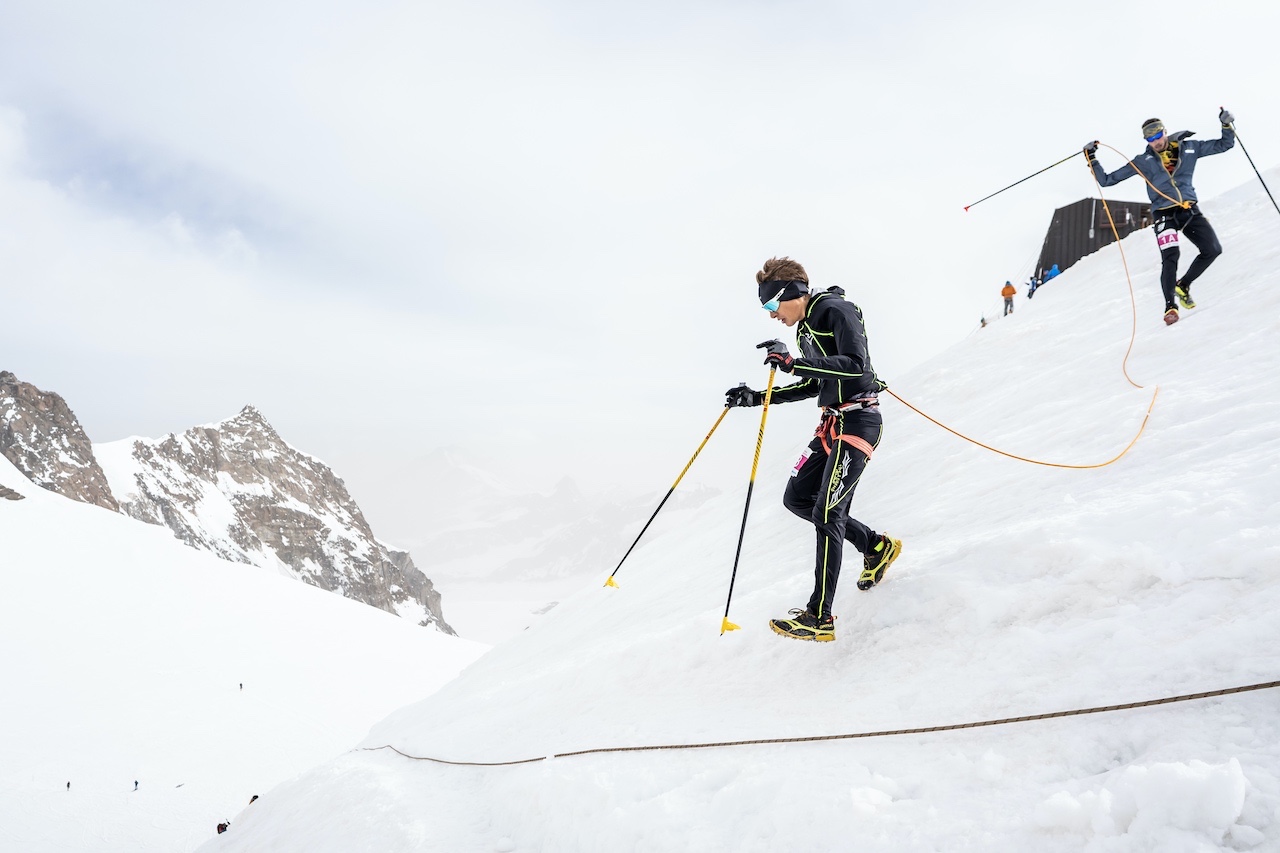 William Boffelli and Nadir Maguet plummeting down from Margherita Hut at 4,554m altitude, the turning point of the race. ©iancorless.com

Today, nothing stopped the Monte Rosa SkyMarathon, Europe’s highest race, from continuing the legend which began back in 1992 with the race that launched skyrunning in the small village of Alagna Valsesia on the Italian side of the mountain.

558 athletes from 36 countries took part in the third edition after the 2018 relaunch, a slightly reduced number due to Covid restrictions.

A ‘mere’ 35 kilometres long, the severity of the race is measured with a gruelling 7,000m vertical climb to the Margherita Hut at 4,554m altitude marking the turn-around point. Adding to this unique skyrunning recipe is the challenging terrain over moraine, snow fields and glaciers. The second edition of the AMA VK2, a double Vertical Kilometer®, was concomitant, covering half the course of the main race – uphill only.

One man, Italian William Boffelli, won the race for the third time, each time with a different partner. Today, he paired with Nadir Maguet, winner of the AMA VK2 in 2019. The partnership paid off, crossing the finish line first in a strong 4h43’58”.

Boffelli commented, “I said ‘third time lucky’ before the race and I did it! Certainly, my most unexpected win, not because of my partner, but because I’m recovering from a small injury. However, I couldn’t miss out on taking part in the Monte Rosa SkyMarathon again!”

“We did a great race, right from the start,” commented Maguet. “We always pushed hard and after winning the AMA VK2 two years ago, I finally ran the full course. The snow conditions weren’t ideal, but we managed a great time anyway!”

Second men’s team at the finish were Italians Franco Collé and Tadei Pivk in 5h01’28”. Collé set the record with Boffelli here in 2018 in 4h39’59” and Pivk, a skyrunning champion, after many years away from racing, proved his prowess yet again. Third to close the men’s podium were Henri Grosjacques and Daniel Thedy in 5h13’07“.

After a week of severe heat and zero temperatures even at 4,300m altitude, the snow was soft underfoot, adding to the challenge. To ensure the safety of the runners, apart from mountain guides, the alpine rescue service and expert volunteers, the runners must run in pairs, roped together, wearing micro crampons.

An incident did occur due to a crevasse opening up under a competitor on the glacier who had gone slightly off-course. Fortunately, his partner was able to hold him with the rope. A mountain guide was immediately on the scene and the rescue helicopter was called. The injured athlete was taken to the nearest hospital in the Aosta valley and fortunately, is not serious.

A great sign of solidarity came from another pair of competitors who arrived on the scene after them to help, sacrificing precious minutes – André Jonsson from Sweden and Remí Français from Switzerland, who finally finished in ninth place.

The women’s race presented an interesting new twist with the participation of top skyrunners, Swedish twins, Lina and Sanna El Kott Helander, their first time racing at such high altitude – and a little worried. Facing strong competition from Italians Giuditta Turini and Laura Besseghini who led the 2019 until the final stages, the twins closed in 6h22’12”.

“A wonderful race, a spectacular course! We’re so happy we’ve had the opportunity to run in this spectacular environment,” they chorused. “We’re not used to the altitude but had no problems in the upper part. The snow was melting fast towards the finish, but we managed to arrive anyway! First needless to say.

The Italian team Turini, Besseghini, closed this time a triumphant second in 6h31’30” and a close third, were Italians Marina Cugnetto and Roberta Jacquin in 6h32’35”.

It came as no surprise that the top men’s and women’s teams were Italian, racing on home ground, but runners from low elevation countries like Sweden, concerned about the altitude, performed well.

The second edition of the AMA VK2 saw American Hillary Gerardi steal the show. In 2018 she won the Monte Rosa SkyMarathon with Briton Holly Page and this year, unable to take on the long race, wanted to come back to Alagna to drink in the mountain air. Nine kilometres of pure uphill with 2,086m vertical climb, this perfect double Vertical Kilometer® tops out at 3,200m altitude. She crossed the steep, snow-clad finish line in 1h58’57” – a new record.

With the 2019 winner racing (and winning) the Monte Rosa SkyMarathon, the top spot went to Italian Damiano Lenzi in 1h32’13” beating Nadir’s record by an incredible 9’48”. Switzerland’s Pascal Egli closed second in 1h38’15” and Italy’s Giovanni Zamboni, closed the podium in 1h42’43”.

What was one man’s dream back in 1992 became history, the history of an innovative new sport. “The Monte Rosa SkyMarathon, the race that marked the birth of skyrunning, is here to stay!” stated Marino Giacometti, founder of the sport and President of the International Skyrunning Federation. “The stage is set to repeat history – a legend in the making.”

Manuel Gambarini, Race Organiser and President of the AMA Organising Committee together with the team, wish to thank the Mountain Guides, the Alpine Rescue Service and all the volunteers – on and off the mountain – together with sponsors: SCARPA, BUFF, Cimberio, NAMEDSPORT>, Suunto, Nortec, NATURAL BOOM, CMP, Baglione, SAIS Compensati.