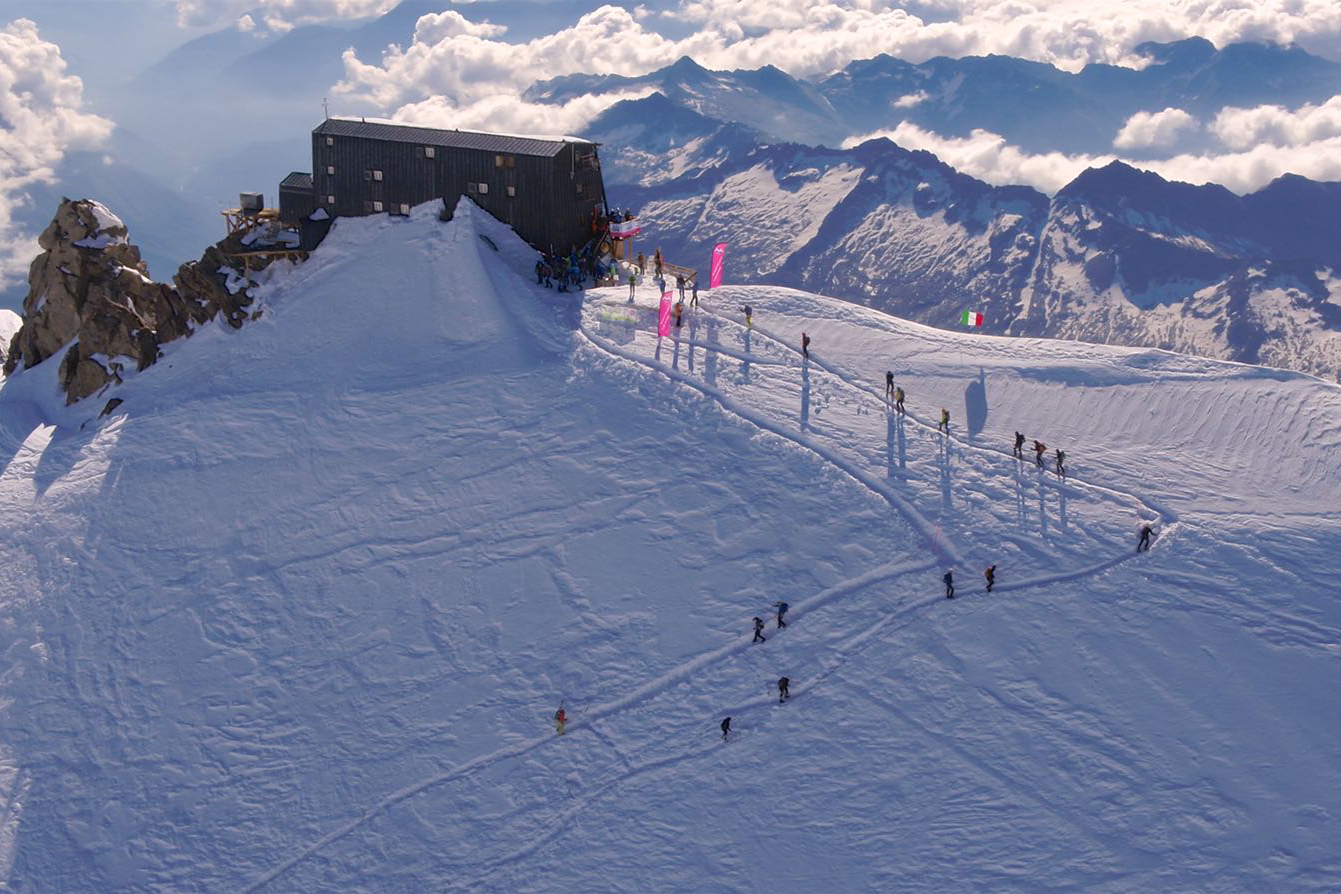 The top of Monte Rosa at 4.554m with the Margherita Hut. ©Actionmovie.it

Monte Rosa SkyMarathon, the race that marked the birth of skyrunning, returns for the second time after last year’s successful relaunch, together with the new AMA VK2, a double Vertical Kilometer®. Both events will take place on Saturday, June 22, 2019 in Alagna Valsesia, Italy.

The Monte Rosa SkyMarathon is Europe’s highest race, summiting at 4,554m altitude on the Italian/Swiss border. With a “mere” 35 km distance and a total vertical climb of 7,000m, it represents the pure essence of skyrunning and celebrates the birth of the sport with the first race here in 1992 and the first race to the summit in 1993.

Replacing last year’s shorter up-and-down SkyRace, a double Vertical Kilometer® has been introduced – the AMA VK2, featuring a lung-busting uphill 9 km climb to an altitude of 3,260m with more than 150 participants. Currently, more than half the course is covered in snow.

The Monte Rosa SkyMarathon is characterised by demanding uphill and downhill sections, moraine, snow fields, a vertical couloir, glaciers with crevasses and… potentially severe weather conditions. Racing in teams of two, competitors are roped together for safety. To meet the heavy demand, the number of entries has been increased from 300 to 400 competitors (200 teams) from 25 nations.

The standing records were set in 1994 by Italians Fabio Meraldi and Gisella Bendotti in 4h24’ and 5h34’ respectively. A total of four editions took place from 1992 to 1996.

Meraldi, 53, went on to acquire legendary status with his victories and records across the world. Acting as ambassador and attending the events on Saturday, he made this contemplative comment, “I would like to make a small or…a big consideration! If ‘my president’ and creator of this discipline, Marino Giacometti, and me, Fabio Meraldi, at the time, athlete, hadn’t dreamt and believed that running could touch the sky, all this excitement and innovation wouldn’t be here. I dreamt of “skyrunning” but my eyes were open!”

Bendotti, 56, who placed fifth last year, hasn’t been able to train for the long race but will attempt the AMA VK2 to support the events. “Thinking of the record, I guess someone will break it on Saturday. I will be sorry, but it can’t last forever!”

The women’s ranks will be honoured by the participation of Lizzy Hawker, five-time UTMB winner and National Geographic Adventurer of the Year and organiser of the nearby Ultra Tour Monte Rosa which circumnavigates the mountain. She will race with Fränzi Gissler from Switzerland. In her own words, she doesn’t consider herself an elite any more, but, “I’m just happy for the chance to come to the race and to try going up Monte Rosa instead of just around it!”

The women’s field is led by American Hillary Gerardi, 2018 winner with Briton Holly Page, who is recovering from injury. This year she will partner with French woman, Iris Pessey. “Last year I had such a great time at Monte Rosa SkyMarathon that it was an easy choice to come back,” said Gerardi. “The race combines running, alpinism, camaraderie with a partner and some of the most beautiful mountains in the Alps, not to mention the strong history of the course where skyrunning was born…it’s a race you shouldn’t miss.” 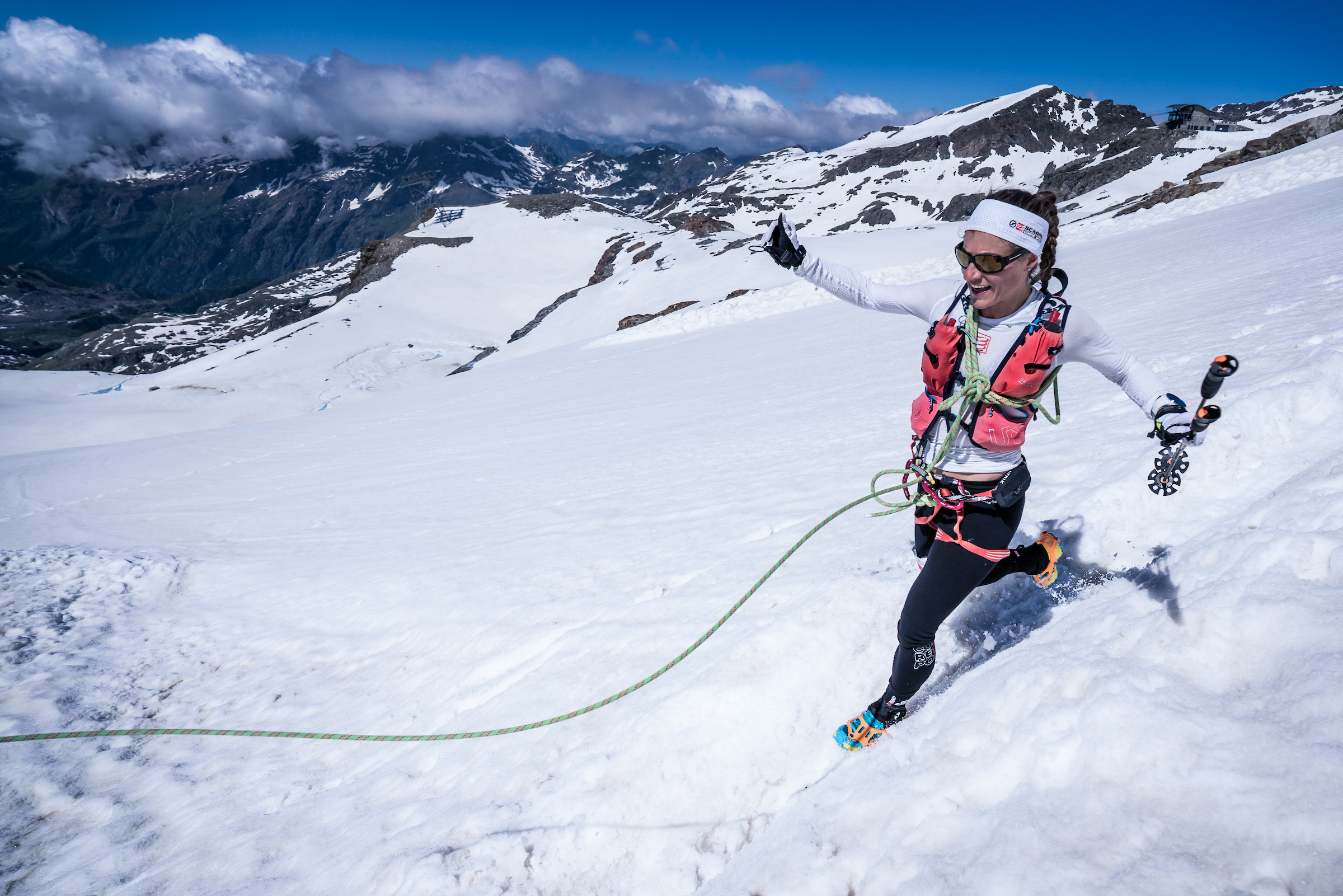 Among the top challegers will be Italy’s Giudita Turini, second last year, Oksana Stefanishina from Russia, third and, from Poland, Natalia Tomasiak and Iwona Januszyk all heading new teams.

In the men’s field, aiming to break the record will be last year’s winner, Italian William Bofffelli, running with a new partner. “I feel Monte Rosa is also my mountain because it has given me the biggest emotions, not just in sport. Coming back here means a lot. Unfortunately, my partner Franco Collé has had to renounce due to health problems. Together with Jakob Herrmann, we’ll try to win the race, also for Franco as I know how much it meant to him to race here.” Herrmann, from Austria, recently placed third in the iconic Mezzalama Trophy ski-mountaineering race with Kilian Jornet.

Pushing the pace will be Italians Alberto Comazzi and Cristian Minoggio second last year in the super-strong international field. “This year, my condition is a bit behind, rather like the summer…Who knows what weather and conditions we’ll find in the race. Last year it was a dream up there. Our eyes will be on the forecast to understand how best to face the course,” said Minoggio.

What was one man’s dream back in 1992 became history, the history of an innovative new sport. Giacometti, skyrunning inventor, states, “It’s time to take skyrunning high again – to the summit of Monte Rosa. The inevitable move from individual runners to teams of two might create a few problems with those aspiring to absolute victory, but the demand and global growth of the participants is confirmation that last year’s relaunch after 25 years marked the way for the return of skyrunning to its origins.”

Race organiser and President of the AMA Organising Committee, Manuel Gambarini, commented, “We’re ready for this new challenge to consolidate the modern format of this great event which could become the emblem of the future of skyrunning… not just of its history.”

Despite severe, potentially hazardous conditions, including recent heavy snow falls, possible hypoxia from the thin air, the summit of Europe’s second highest mountain is an irresistible magnet attracting some of the world’s strongest skyrunners to take part in this colossal challenge, the Monte Rosa SkyMarathon.

The AMA Organising Committee and the team wish to thank the Mountain Guides, the Alpine Rescue Service and all the volunteers – on and off the mountain – together with sponsors: Crazy, Eolo, Buff, Cimberio, Kratos, Ultimate Direction and media partners: iancorless.com, Radio Dee Jay and Montagna TV.